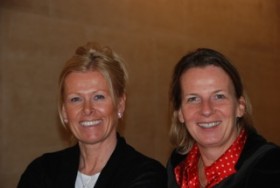 Elin Hurvenes and Esther Mollema can you tell something about the importance of the Professional Boards Forum and the results until now?

Elin: “We started off the forum in Norway by following legislation of the quota in 2002. It has given boards opportunities to get in touch with a number of women who would otherwise not got on to boards. It helped chairmen to understand that there are a lot of talented women out there who are not into their network. The Forum is of course not a magical thing. If a woman wants to be secure a of board role, you cannot just lean backwards waiting for the support of the Professional Boards Forum. To get an opportunity in a board it is very important for women to have their own career plan, to be active in many fields and networks and to have a long term horizon. And the Forum get help to offer the platform.”

What do you two both have in common and what is the base for this collaboration?

Esther: “I’ve been seriously involved with the advancement of women in organisations. And the Dutch law, which was passed in 2011, said that organisations larger than 250 people in 2016 at least must have 30 percent of women in boards. But is it complier explain. I knew that if someone did not go after this, it would be a lost opportunity. I felt that we needed to make sure that every industry has organisations that want to comply with this goal and actively help them. Most women in companies have limited interaction with board. We needed to create that platform. I searched with the help of colleague Petra Vriens how to make this happen. Petra organized for us to meet Elin Hurvenes in Norway. Her track record is amazing and we really liked the way she was managing this. And now, after several meetings, we are here in the Netherlands and working together.”

What is the importance of working together with other European countries?

Elin: “When I looked at the situations in the Netherlands, France and the UK, I realised that I do need a local partner, because of the language and the local culture and the people. In the UK, for example I work with Jane Scott. Here in Holland quite a few people approached me for the Forum. But when Esther came it felt immediately right because we are on the same level and speak the same language. Together with Jane Scott, I try to get the Forum on the agenda in France and of course with a local partner. I even talk to people in Brazil. It is very important to work with other countries. The more countries that are successful, the more pressure it gives to other countries to start.”

What are the plans of the Forum and Direction in the Netherlands?

Esther: “At the end we want to achieve that, the Dutch quota legislation will be fulfilled in a successful way and make companies more successful. At this stage it is hard work to get all the right people together. We need to find the people who are also willing to make this happen. I am sure that we are going to make this happen, because there are very many capable women and we found powerful executives who are very supportive.”
Elin: “I would like to add that the Forum started after the quota legislation and not the other way round. It came as a direct response. There are not many natural arenas where board members can meet executive women. Places where women with the skills and ambitions to go on boards, can meet the people who can influence this. The Forum creates these arenas in order to make it happen.”

You often hear that the right women are hard to find, do you agree with this?

Elin: “Yes I hear this a lot. Mostly chairmen are saying that women are not interested. And if they are interested, then they don’t have CEO experience. If you look in Norway at an average board with six or seven people than there are mostly only one or two in that board with this CEO experience. And when you asked them why they don’t have all this experience, the answer is mainly that a board which exists on people with the same experience, is not a good board. When I started to talk to some chairmen and asked them for what kind of women they look for in the board, they came to four main criteria. The first criterion is a good first and second educational degree. Then solid work experience like twenty to twenty-five years in order to show their management experiences not only in good times but also in times of recessions. I think that these criteria will not be a problem to find the right women. But then, they came with the next two, namely CEO experience and boards experience. These last two are criteria are hard to deliver.”

How do we get the right women in the Netherlands?

Esther: “I know from my own experiences, through training so many women, that there are so many women with these ambitions. So that I think, we can really deliver.” Elin: “If you have worked in a large company for example as head of a division, then the experience is the same as the CEO experience of a small company.”

Is there already some information about the upcoming events in the Netherlands?

Esther: “We are planning to organise our first event, but we have not set a date yet. We are very glad to mention that it will be hosted by Shell in The Hague. Their senior management is very committed to it. As soon we have some more information about this, we will communicate.”

What are your drivers to achieve this and what is your passion?

Elin: “It is very easy to answer. I have the best job in the world, because I meet the most interesting and amazing people from all different countries and in different roles. What drives me the most is the majority of the people on boards are inquisitive, they have reached already so much with their careers and they are curious to my project.”
Esther: “I agree with Elin.  I’m always looking to see if we can make a change for the better. I have been interested in diversity, because I strongly believe that in the end diversity makes better organisations and a better world.”

Where do you think we’ll stand one year from now?

Esther: “I do think time is our most important issue. Result is what counts. But in a year from now, we certainly have had our first event and have our first small successes in the sense that people have found each other.”